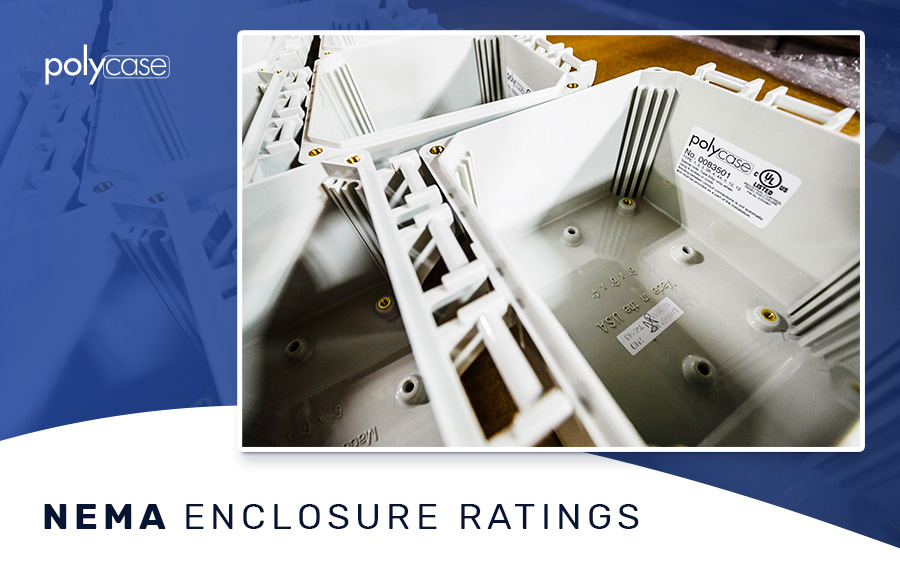 It’s always critical to compare what you need with what a product offers before you make a purchase. For those buying electrical and electronics enclosures, there’s an easy way to do that: the NEMA enclosure ratings system. This popular system gives enclosure buyers a comprehensive way to evaluate an electronics enclosure’s capabilities, from a basic protective enclosure to a heavy-duty model that can survive corrosion, washdowns with high pressure hoses and even submersion.

Whatever your enclosure needs are, Polycase offers a huge selection of NEMA-rated enclosures to create your ideal solution. In this article, we’ll give you an in-depth look at what you can expect from each NEMA enclosure rating, plus suggestions from Polycase on models that could fit your needs. First, let’s take a glance at how the NEMA rating system works.

How Do NEMA Ratings Work?

The NEMA system is a tiered rating system established by the National Electrical Manufacturers Association to help businesses, researchers and hobbyists select the enclosures that are right for their needs. Each rating identifies a specific set of protective characteristics that an enclosure with that rating provides. For example, enclosure buyers looking for a corrosion-resistant enclosure will want a model rated with at least a NEMA 4X, while those concerned about an enclosure being submerged in water will want a NEMA 6 or NEMA 6P. 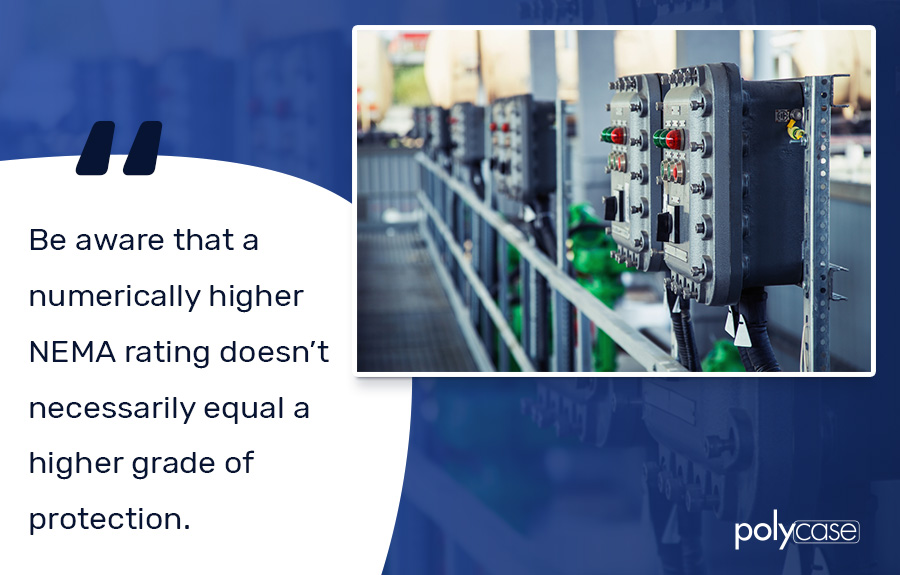 Finally, keep in mind that NEMA does not test products for compliance with its ratings, and that a manufacturer can list its products as NEMA-rated without having to offer proof. So, how can you find assurance that an enclosure actually provides the protection it claims? Look for a NEMA rating that’s certified by UL (also known as Underwriters Laboratories), an organization that performs rigorous scientific testing on all kinds of products to certify that they meet relevant industry standards. Polycase’s enclosures are UL-certified to be in compliance with their listed NEMA ratings so that our customers can be confident that our products are built to perform.

What’s the Difference Between NEMA and IP Ratings?

You might have also heard of Ingress Protection (IP) ratings being used to evaluate electrical enclosures. The IP system is similar to NEMA, although its ratings aren’t completely interchangeable. The two biggest differences between NEMA and IP ratings are:

For more information on IP ratings and how they stack up with NEMA ratings, take a look at a comparison chart. Next up, let’s move on to some questions you can use to quickly get an idea of what NEMA ratings might be most relevant to your application.

What NEMA Rating Does My Enclosure Need?

The goal of the NEMA rating system is to make it easy for anyone to find the perfect enclosure for their application. In this article, we’ll go into detail about the features that each rating offers. But to get an idea of which ratings you might need, consider these questions:

Of course, this list doesn’t cover every single circumstance—so read on to learn more about the capabilities and features you can expect from each NEMA enclosure rating.

NEMA 1 enclosures are used widely across many different industries for applications that don’t require substantial protection from airborne debris or dripping and splashing liquids. You’ll find them everywhere–from retail stores to office buildings.

Polycase Recommends: Our NEMA 1-rated enclosures include both Polycarbonate and ABS plastic options. Check out our NEMA 1 enclosures page to learn about our full range of NEMA 1-rated options.

NEMA 2 enclosures offer similar protection as NEMA 1 models, but with one extra feature:

Most of our enclosures are rated for both NEMA 1 and NEMA 2 compliance. However, for those who need an enclosure rated for outdoor performance, you’ll want to choose a model with a NEMA 3, 4 or 6 rating.

NEMA 3 enclosures offer a solid level of basic protection for outdoor applications. You’ll find them used for outdoor security systems, junction boxes, utility controls and more. These enclosures are designed to offer the same protection as a NEMA 1 or 2, but they also must:

The NEMA 3 rating series also offers several variant ratings: NEMA 3R, 3X, 3RX, 3S and 3SX. Each has a slightly different feature set that might make it right for your application:

Polycase Recommends: We’ve got a wide range of NEMA 3R enclosures available, such as our tough and cost-effective HD series. Most of our enclosures also include higher protective ratings to give you the most options possible for how and where to deploy the enclosure. 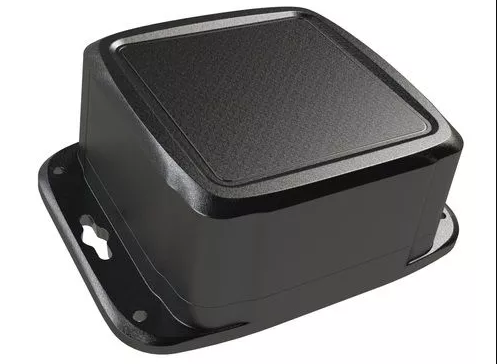 An enclosure with a NEMA 3 series rating is a great choice for light- to medium-duty outdoor applications. However, they are not completely waterproof or weatherproof, so in conditions where an enclosure will have to stand up to heavy precipitation, flooding or washdowns with a hose, you’ll want to move up to a tougher grade of protection with a NEMA 4 or NEMA 6.

The NEMA 4 ratings are among the most popular options for outdoor enclosures, as they offer an excellent compromise between cost and protection level. A NEMA 4 enclosure offers all the protective features of a basic NEMA 3 rating, but also:

These enclosures are completely watertight against splashing and dripping water, making them popular for medium- to heavy-duty outdoor applications, as well as indoor facilities that undergo frequent hose-downs such as livestock processing and food manufacturing operations.

A NEMA 4X enclosure provides the same protection as a NEMA 4, but is also resistant to corrosion from harsh chemicals or saltwater splashing. Note that although higher ratings like NEMA 6 and 6P aren’t specifically designed to provide corrosion protection, most of our NEMA 6 enclosures are also designed to meet the 4X standard for corrosion resistance. 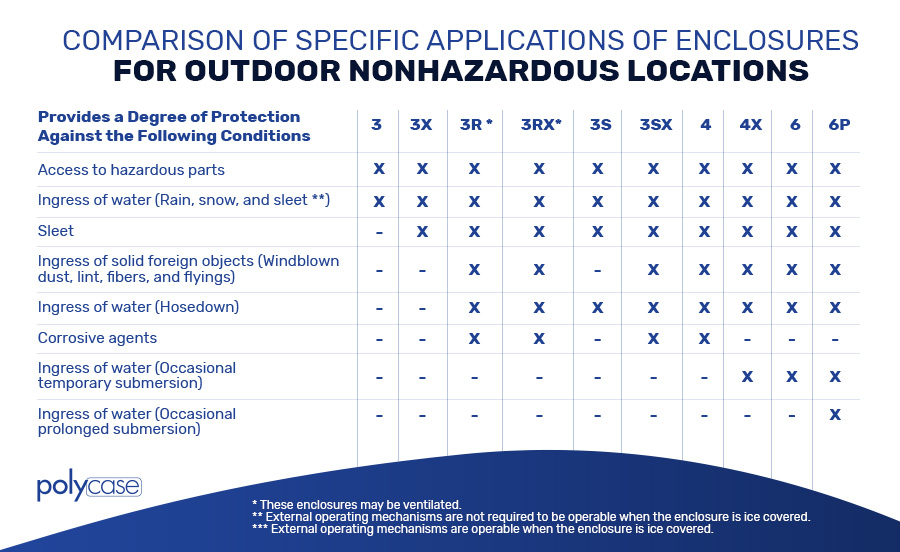 The NEMA 5 rating is less common than some others and is intended for indoor applications. It offers the same protections as a NEMA 1 or 2, with one extra feature:

The NEMA 6 series of ratings offer some of the sturdiest and most comprehensive protection available for outdoor electrical or electronic applications. A NEMA 6 enclosure provides the protections of a NEMA 4, but also:

The NEMA 6P rating, the highest level of enclosure protection available for a non-hazardous environment, offers the same features as a NEMA 6, but is designed to protect against prolonged (rather than temporary) submersion at a limited depth. NEMA 6 and 6P enclosures are popular for marine applications and other environments in which flooding is a major concern.

Polycase Recommends: Our NEMA 6 enclosures include our popular ML series and YQ series, designed to meet the most demanding standards of the NEMA 6P rating.

NEMA 7, 8, 9 and 10 ratings are substantially different from other ratings in that they are intended for use in hazardous environments (as defined by NFPA 70). Enclosures with these ratings are designed to protect against combustion, explosions and other types of hazards not typically encountered in most environments. Polycase does not currently offer enclosures with NEMA 7, 8, 9 or 10 ratings.

Enclosures with NEMA 12 series ratings are among the most common for indoor use, as they provide excellent indoor protection that often comes at a lower cost than outdoor-rated enclosures. You’ll find them used in warehouses, light manufacturing and other indoor applications.

The NEMA 12 rating offers the same protection as other indoor ratings (hazardous parts access, solid foreign objects, debris circulating in the air) and it also:

The NEMA 12K rating offers the same protection as NEMA 12, but these enclosures are constructed with pre-fabricated knockouts. These knockouts are easy to remove with a standard screwdriver and make installation a snap. However, if you’re using an enclosure with knockouts, check out our selection of NEMA rated waterproof cable glands and vent plugs to ensure your enclosure still has the protection you need.

Polycase Recommends: Our selection of NEMA 12 enclosures includes a full selection of materials and features options from the cost-effective ABS plastic WA series to the heavy-duty stainless steel SA series.

Our final rating, NEMA 13, is another indoor enclosure rating that’s a step up from NEMA 12. It’s less common than NEMA 12 and is generally used for indoor industrial and mechanical applications. It includes one more protective feature:

Polycase Recommends: Many of our NEMA 12 models also feature NEMA 13 ratings, including our clear-covered WC series.

Polycase is proud to offer our customers enclosures across the NEMA ratings spectrum at a cost-effective price point. If you have more questions about enclosure ratings or anything else, our experts will be glad to assist. Just call us at 1-800-248-1233 or contact us online.