IP Ratings for Plastic Enclosures: What They Are, and Which Are Available from Polycase 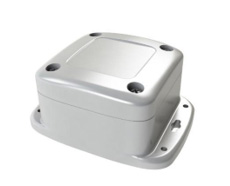 We’re commonly asked about the IP ratings of our plastic electronic enclosures by our European customers. Similarly, we often hear from American companies who are working with European standards and need more information about how American standard NEMA ratings compare with European IP ratings. To address these questions, let’s begin by defining both ratings:

NEMA Ratings. An acronym for “National Electrical Manufacturer’s Association”, these ratings are recognized as an authority for electrical standards in the United States and some parts of Canada. These standards are applied to a variety of items, including but not limited to power cables, plugs, receptacles and enclosures. NEMA enclosure ratings outline standards for protection against solid foreign objects, water, moisture, corrosion and heat as well as impact resistance.

IP Code Ratings. Known as “Internal Protection Rating” or “Ingress Protection Rating”, IP ratings are used internationally as a worldwide standard for enclosures. Unlike NEMA ratings, the IP Code covers enclosures exclusively and only designates an enclosure’s protection against solid foreign objects and water. Both NEMA and IP ratings designate water and dirt protection, but unlike NEMA ratings, IP ratings do not specify an enclosure’s capacity to protect against corrosion, impact, and heat. For this reason it is possible to designate NEMA equivalents of IP ratings but not vice versa.

IP Rated Enclosures Available by Polycase. Although we tend to specialize in ABS enclosures, we have made several styles of electronic enclosures available with IP ratings in addition to NEMA ratings. Our WP series enclosures are designed to meet NEMA 1, 2, 4, 4x, 12 and 13 standards as well as IP65. These are UL listed to UL508-4x specifications (file # E194432). Our polycarbonate clear lid WC enclosure series is likewise available with NEMA ratings and an Ingress Protection of IP65.

It’s important to emphasize that NEMA ratings are far more inclusive than IP ratings. Our many NEMA rated enclosures may easily meet IP Code standards even though they are not yet designated so. Reach out to our team of engineers who are experts in plastics and their ratings and can help you choose the correct IP rated enclosure or equivalent.