What Is EMI Shielding and What Enclosure Should You Use? 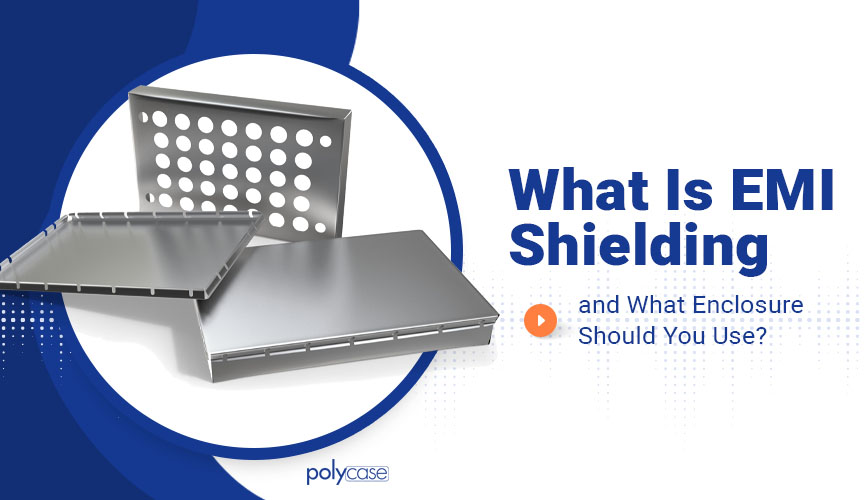 In the 21st century, our world is constantly humming with electromagnetic interference (EMI). The millions upon millions of devices and appliances we use every day create these electromagnetic disturbances, as do certain natural phenomena. Humans can’t feel this interference, but many types of important electrical and electronic devices can.

When a machine receives too much interference, it can lead to serious problems in performance and reliability. That’s why most device manufacturers design their products with built-in systems that reduce or eliminate the effects of EMI. These EMI shielding systems employ a wide variety of methods to protect our most important devices from interference.

If you design, manufacture or use devices sensitive to EMI, it’s important to have a basic knowledge of how this phenomenon works and how to counteract it. In this article, we’ll look at the fundamental principles of EMI and the most common types of interference. Then, we’ll preview some of the Polycase enclosures that offer built-in EMI shielding for sensitive devices.

EMI, defined in the simplest terms, is the transmission of unwanted electromagnetic radiation to an electrical or electronic device. These signals interfere with a device’s operation and can cause significant harm. EMI can originate from many different sources, both natural and man-made. 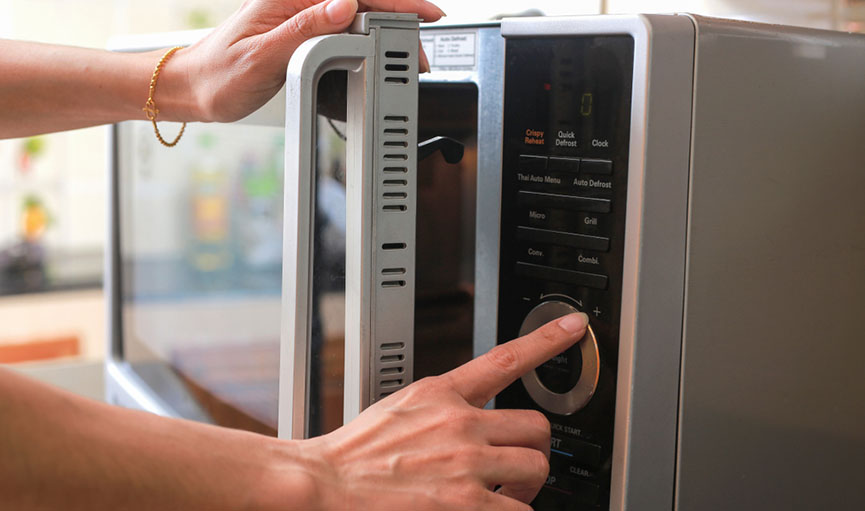 Common household and workplace devices are among the most common sources of EMI. Some devices, such as TV remote controls, create relatively small and weak fields. Others, like microwave ovens and smartphones, create more powerful ones. When these fields come into contact with other devices, they can create detrimental interference.

Furthermore, EMI doesn’t even have to originate from an outside source. Internal EMI, in which one of a device’s components generates interference in another component, is another common source of problems. Upstream problems with the quality and conditioning of power sources are also frequent culprits, and these two types of internal EMI working together can create real headaches for device designers and builders.

As if those sources didn’t cause enough problems, nature itself can create EMI. Atmospheric phenomena like thunderstorms and solar storms are natural emitters of electromagnetic radiation, and they can have similar detrimental effects on electrical devices.

You might also hear about radio frequency interference (RFI) in the context of discussions about EMI, as the two terms are often used together or even interchangeably. RFI is a subset of EMI that occupies the band of the electromagnetic spectrum known as the radio frequency (RF) band. It’s an especially common type of interference because so many devices, including many common types of power switching equipment and electric motors, can emit on frequencies in this spectrum. 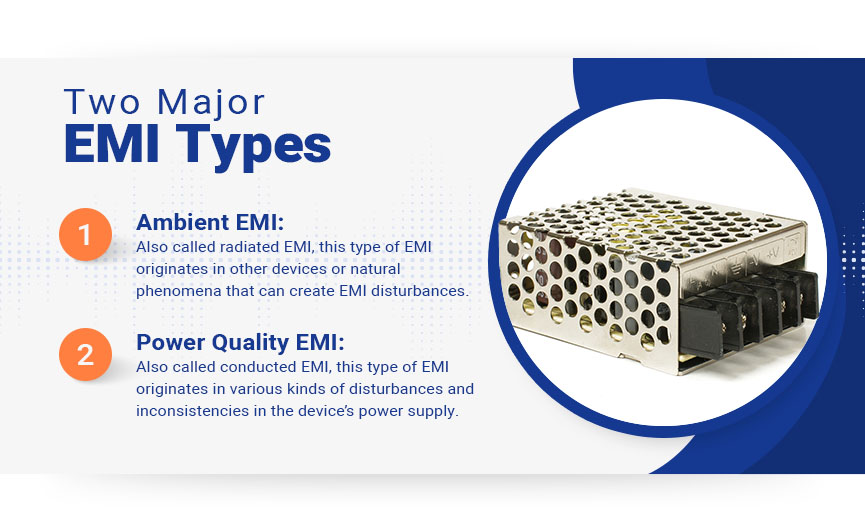 The Two Major Types of EMI

Two specific types of EMI are responsible for the majority of interference in electrical and electronic devices. Knowing the difference between these two types and how to tell them apart will help pinpoint the source of EMI problems in your devices and allow you to more effectively evaluate solutions.

Some subsets of EMI affect devices and systems in certain application types. Three of the most important application-specific EMI types are:

EMI and RFI can affect many different technologies and cause a wide variety of problems. Common performance issues EMI can cause include: 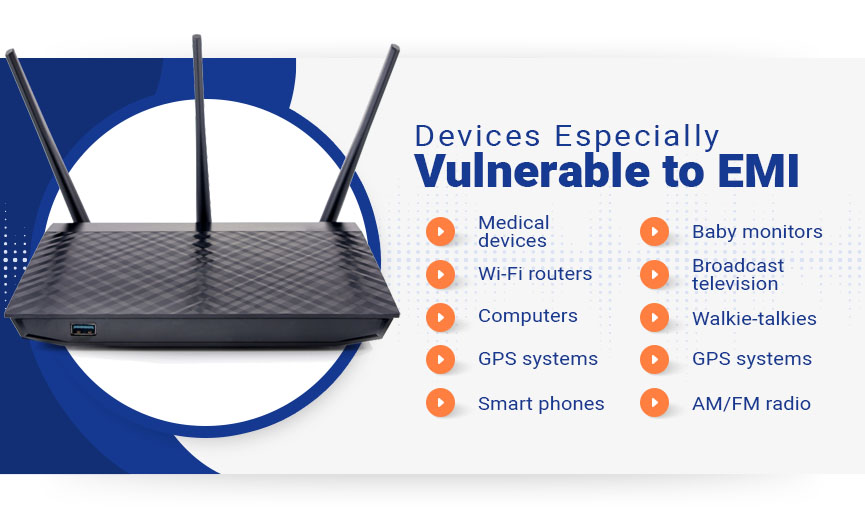 These are some types of devices especially vulnerable to EMI:

Of course, the irony is many of the devices most vulnerable to EMI are the same devices most susceptible to it. Part of what’s often so frustrating about troubleshooting EMI issues is the phenomenon is a two-way street, with devices able to both transmit and receive interference.

The U.S., European Union and many other countries have regulations known as electromagnetic compatibility (EMC) standards that govern EMI emissions from electrical devices. EMC standards mandate that devices capable of emitting EMI can’t interfere with certain critical technologies, such as medical devices and emergency alert systems.

The specifics of EMC standards can vary widely, so it’s important to be familiar with which set of common EMC standards your device will need to comply with. Some contain basically the same core information, while other standards, such as those used in aerospace or medical equipment, are highly specialized to their applications. Standards also vary by country, although some countries have harmonized theirs with other nations to facilitate trade. 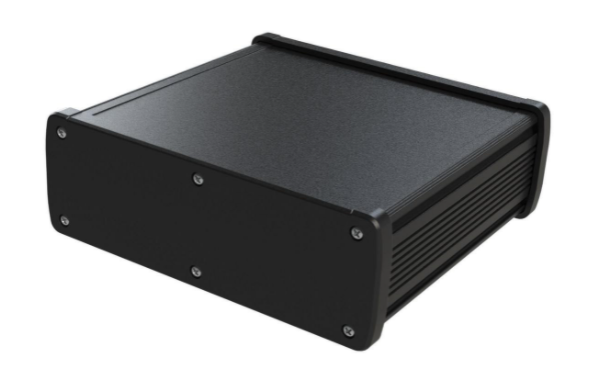 EMI shielding is the practice of using various countermeasures to protect electrical and electronic devices from EMI. Some common methods of EMI shielding include: 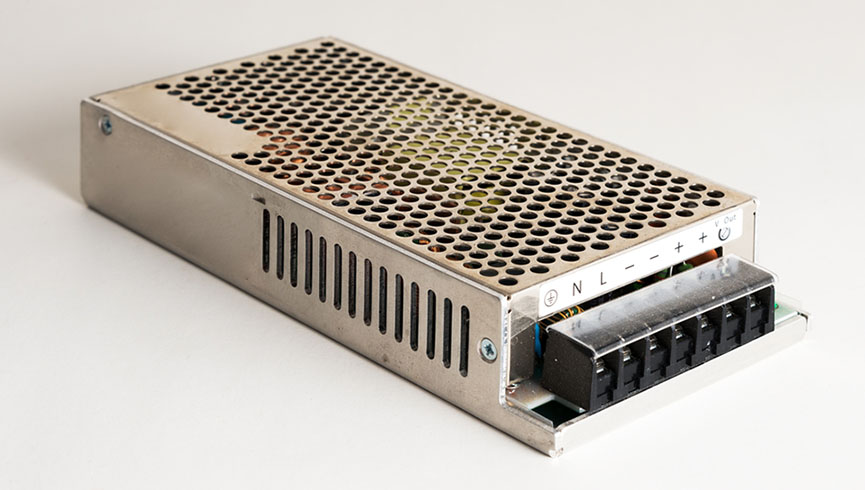 EMI is a complex phenomenon that can interact in unexpected ways with various devices, materials and circuit pathways. These are a few of the most important facts you should know about EMI and RFI shielding:

Many of the most common use cases for Polycase enclosures require EMI protection. Our customers use our enclosures for everything from industrial controllers to scientific instruments, and there’s no room for interference in these highly sensitive and delicate applications.

That’s why Polycase offers a full range of enclosures with EMI shielding features. Many of our leading indoor and outdoor enclosure models, such as our stainless steel and aluminum enclosures, are naturally resistant to EMI. That makes them an outstanding choice for EMI-sensitive devices. Below, we’ll quickly look at some of the top options Polycase offers for EMI and RFI shielded enclosures. 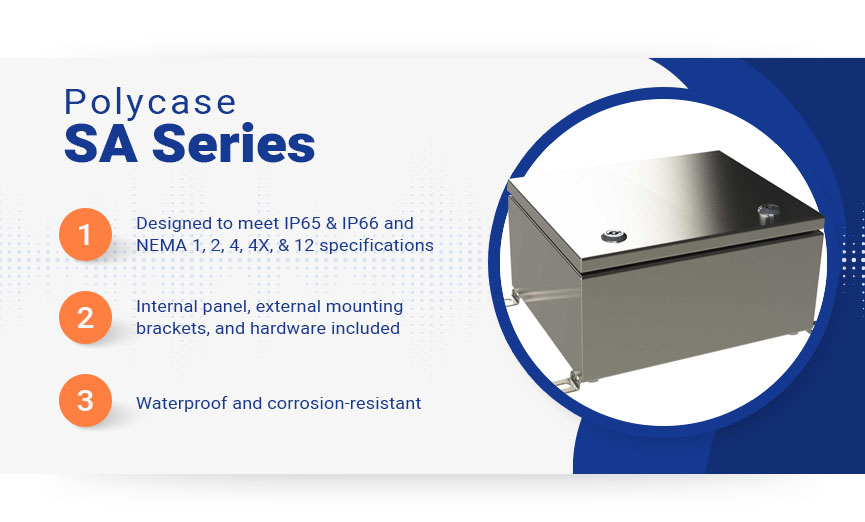 Need a Stainless Steel Enclosure? We Have Those, Too!

Polycase is always happy to answer our customers’ questions about enclosure features, specifications and more. Interested in learning more about how our enclosures can protect your devices from harmful interference? Call our experts at 1-800-248-1233 or contact us online for more information.